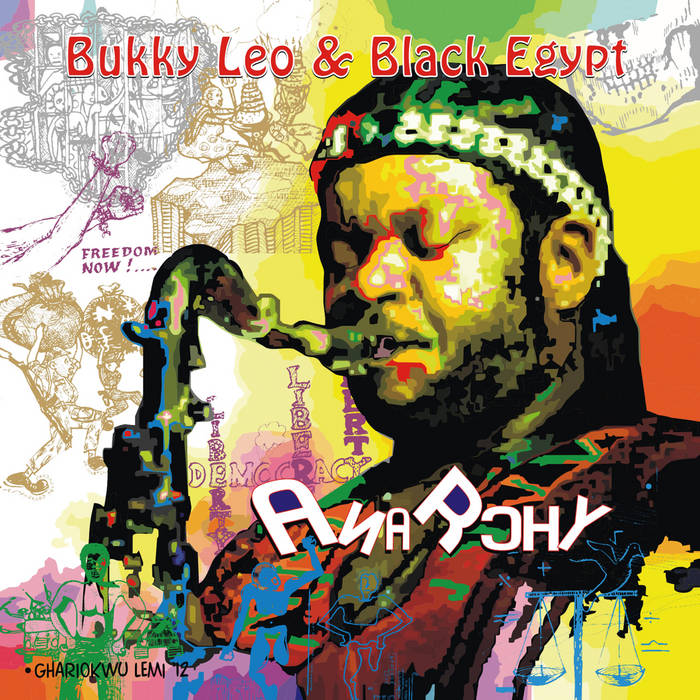 Bukky Leo, one of the most prolific UK jazz innovators, returns with a strong musical and intellectual statement. His new album “Anarchy” is not only a convincing, fresh translation of afro-beat for the 21st century, but these thirteen new songs also close a very personal circle for Bukky Leo, spanning nearly 30 years.

Imagine yourself in London in the late Eighties. When you walked up Camden High Street, it wasn’t the smell of fast food but the sound of jazz in the air. Enter Dingwalls and you were in a different world. Pulsating rhythms, inspiring dancers, a truly fascinating, global spirit, it felt something like a revolution at that time. Bukky Leo was at the heart of this creative explosion, which DJs like Gilles Peterson or Russ Dewbury created a soundtrack for. Remember: There was no internet at the time, it was by word of mouth to be in the right place and the right time. As much as the jazz dance community was about showing off and being cool, essentially it was about the freedom of expression. This was a rare era when hiphop met bebop, Northern Soul got into jazz and funk rediscovered its African roots. It seemed like music could actually be the catalyst for diversity and democracy, peacefully pro-active in nature. Yes, it seemed to be possible at last to overcome the stigma of the Thatcher era, the re-active dilemma and creative implosion of the Cool Britannia aftermath was not yet in sight.

To see Bukky Leo enter the stage at that time was a revelation. Growing up in Lagos Nigeria, he was the saxophonist in Tony Allen’s band and went on to play with the great Fela Kuti. Coming to London In 1982 he found himself in the midst of post-punk experimenting with world music. His debut „Rejoice in Righteousness“ (released on Eddie Piller’s Acid Jazz label in 1988) was the first encounter with afro-beat for many young, aspiring DJs and music lovers. The follow up „River Nile“, nominated for the US African Music Awards in 1990, put Leo firmly on the jazz map. When acid jazz decided to take a break, Bukky Leo embarked on the definitive pilgrimage to Egypt where he laid down the intellectual foundation for Black Egypt. The trip to Nile was an eye opener for him. After some years of developing their sound, Black Egypt emerged as one of the most acclaimed afro-beat groups outside Nigeria, releasing the album “Afrobeat Visions” on Mr. Bongo in 2005, preceded by Leo’s guest appearance on Ben Mitchell & Russ Dewbury’s album “Rapping With The Gods” in 2003.

Both releases arrived in a time shortly before the digital age took over the music business, the DJ was the tastemaker and clubs were the places to discover exciting new music. Still, in the outside world, the social consensus seemed to disappear and made way for entrepreneurship and the emergence of the finance sector: „But people are not content with the outcome of privatisation, the new enterprises are not for their benefit. This may sound like a political discussion, to me it has more of a spiritual dimension though,“ he explains. “In times where things are not in the place where you think they actually should be it is essential to identify what really matters. Africa is the focal point for me.“

Musically „Anarchy“ digs deep in afro-beat’s foundations, expertly laid down by Dennis Bovell at the controls: „When I toured with Fela and then with Roy Ayers I met Dennis. I am very honoured to have him as a producer.“ Apart from being one of the originators in modern British reggae with Matumbi, Bovell worked with everybody from The Slits to Bananarama, from Sade to Edwyn Collins. With Gilles Peterson and DJ Simbad on remix duties for the first single „Skeleton“, “Anarchy” features two other protagonists of highly innovative music. „It was a long process though. I recorded the first demos with my keyboard player Kishon Khan (a key figure in the British Bangla-Afro-Cuban-Jazz circle), we tried various studios and ended up in this great place in Battersea.“ The result is a refreshingly flowing, instantly accessible but still tight and edgy album with a no-nonsense, highly musical approach.

The topics Bukky Leo touches on “Anarchy” are universal. While “Fella Fella” is an observation of everyday street life in Britain with a parodique twist, ''Man’s Dilemma'' touches a common theme in gender relationships. Bukky explains with a big smile on his face: “Sometimes you have to be a mind reader to know what your partner is up to. Funnily, I think women play this game more often than men.” “Rhythemic” and “Don’t Gag Me” drop as powerful pleas for the freedom of body and mind. ‚Jahfrobeat’ (recorded with London DJ Koichi Sakai, known for his unique style between jazz, reggae, house and afro) actually is about African and Japanese cuisine, a plea for a more life sustaining, nourishing diet. “We tend to forget the importance of these things,” Bukky puts the message of “Anarchy” in a nutshell and adds a simple truth impossible to ignore: “The power of music can’t be ignored

Bandcamp Daily  your guide to the world of Bandcamp

Cannibal Corpse's George "Corpsegrinder" Fisher stops by for an interview